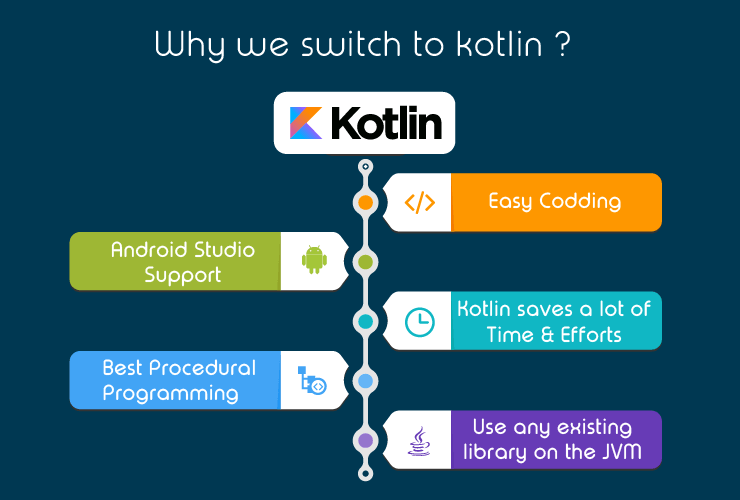 When you think about Android development, chances are one programming language immediately springs to mind: Java.

While itâ€™s true that the majority of Android apps are written in Java, when it comes to Android development, Java isnâ€™t your only option.

Why Should I Make the Switch From Java?

The biggest issue is that Java isnâ€™t a modern language and although Java 8 was a huge step forward for the platform, introducing lots of features that developers had been waiting for (including lambda functions), at the time of writing Android only supports a subset of Java 8 features. It seems unlikely that Android developers will be reaping the full benefits of Java 8 anytime soon, so for the foreseeable future if you want to use Java in your Android projects, then youâ€™re pretty much stuck with Java 7.

Java as a whole also has some pretty well-documented language issues, including endless try-catch blocks, a lack of extendability, null-unsafety (and that infamous NullPointerException), not to mention a lack of support for functional programming

features. Although Java is starting to add some functional programming elements, such as lambda expressions and functional interfaces, at its core Java is still a procedural language. Javaâ€™s syntax is also pretty verbose, particularly when compared to many modern programming languages.

Kotlin came when Android development needed a more modern language to add to the qualities of Java and aid in mobile development.  JetBrains, the people who created IntelliJ, the integrated development environment also created Kotlin.  It is an open-source, statically typed language based on Java Virtual Machine (JVM). The advantage with Kotlin is that you can compile it to JavaScript and interoperate it with Java. This allows developers to not only easily update old Java apps to Kotlin, but also carry on their old work in Java to Kotlin. try kotlin now

Kotlin is definitely faster to write and thus, much loved by developers. If it takes 50 lines of code in Java, it only takes 1-2 lines in Kotlin. This also means there are much fewer errors and bugs.

Kotlin aids in the building of clean APIs

Kotlin is null-safe by default

NullPointerExceptions are a huge source of frustration for Java developers. Java allows you to assign null to any variable, but if you try to use an object reference that has a null value, then brace yourself to encounter a NullPointerException!

Kotlin gives developers the ability to extend a class with new functionality, which is ideal if thereâ€™s a class that you always felt was missing an important method!

These â€˜extension functionsâ€™ arenâ€™t available in Java, although they are available in other programming languages that you can use for Android development, such as Swift.

You can then call this function on instances of the extended class, via the. notation, as if it were part of that class:

Above examples, there are many things that we cannot do in Java but in kotlin, we can

In Java, it's a doctrine to have the class name that has the same name as a file name to be a public class. It's not necessary for kotlin if you are inheriting a class. It assumes the same visibility modifier for a child class

Kotlin brought simplicity to android development. We have seen these in their approach to inheritance, casting keyword, redundant semi-colon which most recent languages like javascript, swift among others also consider not necessary.

I think Kotlin is easier and simple to learn than Java but the current disadvantages are that there, not much documentation and online learning resources yet as you will have thousands of learning resource all over the internet for Java. However, the good part is that people are here for you to take up your challenges in building an android app with kotlin or learning kotlin.

Another good side of it is that they are a good way to get good StackOverflow reputations both for the questions asked and the solution proffered, codementor's ratings and reviews from mentee and a good way to start a career in kotlin. So in all, I think it won't be bad to try out new things with kotlin for android beginner, Intermediate and or expert developers.